August’s gig was another great night, as you can see.

The photo above is of me on the right with author RJ Barker. I’m not sure who won the pout-off or what, if anything, we had in mind when the photo was taken as I’d had a few ales by this point. The map I’m holding is of the world depicted in RJ’s fantasy novels. I review the first one, Age of Assassins, here.

I really love this beautiful pic of Ida Silkyfish (L), who made the jewellery based on The Outer Spheres, and Anna Smith Spark (R), the Queen of Grimdark, although she looks cheerful here. Anna read from the second novel, The Tower of Living & Dying, which opens with a sea battle so ferocious that someone wearing armour jumps into the ocean to escape, albeit briefly. My review of Anna’s first novel, The Court of Broken Knives is reviewed here, and the British SF Association interview with her by Russell Smith is here. 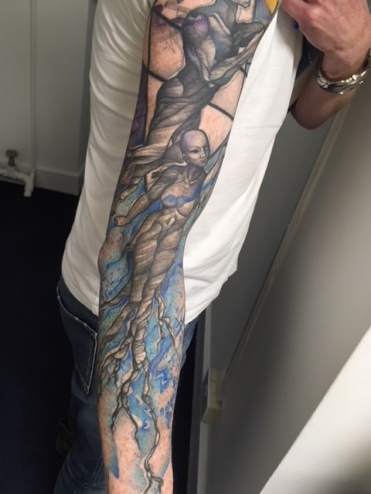 Body art now, with author Adrian Selby, or at least some of him, decorated with strikingly beautiful imagery from his novel Snakewood. I really like body art when it means something and is done well, as in this case. The imagery is based on the roots which make the potions that give the old soldier characters in Snakewood their extraordinary abilities, although it comes at a cost. Like the book, this tattoo is memorable and unique. My review of the novel is here.

This picture is from much later in the evening, as you can probably tell. I’m physically involved with author Ed McDonald in some fashion, with SRFC MC Magnus enabling some kind of Zaphod Beeblebrox impression in the background. Ed has a sleeve tattoo as well, this one based on his novel Blackwing, in which a crow regularly rips itself free of the protagonist’s arm to give him advice. That didn’t happen on Tuesday, more’s the pity, but it was a great evening anyway. Ed’s new novel Ravencry is out now. My review of Blackwing is here.