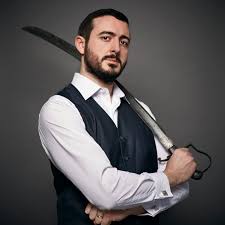 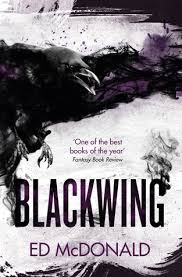 The deft poetry of this striking and very readable debut fantasy novel is no less affecting for its simplicity. A trio of agents lead a gang of disposable mercenaries across an uncanny wasteland called The Misery in pursuit of two heretics. The agents are led by former nobleman Galharrow, whose disgrace in a battle between the Nameless and the Deep Kings has led him to become a Captain of the Blackwing. The Blackwing is a militia whose authority comes direct from one of the Nameless. The Nameless are powerful wizards who defend the Republic against the Deep Kings: even more powerful wizards who want to turn everyone into post-human, golem-like ‘drudges’; a plan that is just one of the bleak seams of contemporary politics running through the novel. Another is the hypocritical nonsense of leadership; summed up by the Nameless directing Galharrow not being nameless at all. He’s called Crowfoot, although that isn’t his real name. He’s far too important to let on details like that, even though he manifests as a tattoo on Galharrow’s arm that comes to life with clumsy, visceral results, squawks barely comprehensible instructions before dying and reappearing as a tattoo again. Thank God he hasn’t got Twitter.

Accompanying Galharrow is his trusted lieutenant; Nenn, a fighting woman of rare skill and ferocity who is a bit like Jen Williams’s Copper Cat crossed with Vasquez from ‘Aliens’, only with a wooden nose. These days I judge any genre novel by the quality of its female characters and Nenn is solid addition whose loyalty can be guaranteed, but only just. Her equivocation is usually based on class conflict or what she sees as unwarranted delays in getting stuck in to some quality blood-letting rather than deviousness, which only makes her more likable, despite being truly awful. That’s the thing about grimdark fiction; it’s always popular with those of us who secretly root for the villains, because they tend to be the protagonists in stories like these.

Last of the three is Tnota, the spectacularly gay but not remotely camp navigator. Hopeless with a blade, but good with an astrolabe, he is invaluable in negotiating the shifting realms of The Misery, in which places change location without warning. The Misery is a great creation; it’s rather like Area X in Jeff Vandermeer’s ‘Annihilation’ only more overtly horrific. Creatures with human eyes regard the interlopers with a combination of regret, envy and hunger, while great craters from the battle that created the place are lined with beautiful but lethal grass. Three primary coloured moons wheel overhead, but give little guidance when the ground below changes like a 2D Rubik’s Cube operated by a drunken lunatic. Despite this chaotic terrain, ‘Blackwing’ is a novel with a great sense of geography. Fortresses line the edge of The Misery, guarding against the return of the Deep Kings. The fortresses are linked to Nall’s Engine, a mysterious device whose firing ended the war and whose presence is a deterrent against the Deep Kings’ return. However, is the Engine working properly? 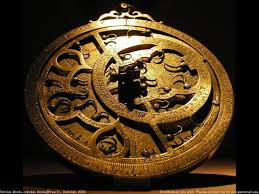 This conundrum underlies the drama as the Deep Kings plan their return across The Misery. Galhallow must use his swordsmanship, brutality and, unexpectedly, love to try and work out what is going on before everything comes to a horrible end. To add even more ridiculous pressure, he has entered a pact with a loathsome sorcerer called Saravor to save Nenn’s life, much to Nenn’s disgust. The sorcerer doesn’t care about the monsters at the gate; he just cares about getting paid. ‘Blackwing’ was written before the current US political nightmare began, but reflects it with ghoulish accuracy. This might be fantasy, but it isn’t escapism. 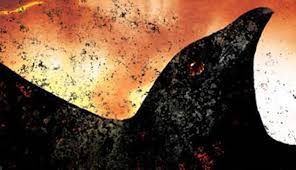 Much contemporary fantasy is close to science fiction; often the difference is one of tone, as is the case here. There is certainly a robust, credible and consistent magic system at work, based on the physical properties of light, while the presence of three moons suggests an alternative planetary setting, although this phenomenon could be the result of dark wizardly meddling. The engine itself has a bulky, practical feel; its design is absurd, shaped like a giant metal jester’s hat; it doesn’t seem threatening so much as lumbering, like some gigantic piece of corporate art.

Like everything in this novel though, appearances are not just deceptive but downright dangerous. They are the result of light, after all, and light is so powerful in this world that ‘spinners’ in Victorian-style workhouses draw down ‘threads’ of it from the moons to power the batteries that drive the engine. For all the Empire trappings though, ‘Black Wing’ is not steampunk, which is a relief, because that genre seems to have forgotten both the steam and the punk. However, the novel is not wholly grimdark either; it is too big-hearted for that. For all his murderous efficiency, Galharrow would not last long at King’s Landing in ‘A Song of Ice & Fire’ because he cares too much.

As well as loyalty to Nenn and Tnota, Galharrow is drawn to his childhood love Ezabeth, both on the orders of Crowfoot, who has his own plans for this brilliant, gifted woman, but also because no matter how hard Galharrow tries, he can never forget those halcyon days in the meadows before the war. He is not helped by Ezabeth’s beauty, which has not changed in the years since he saw her last, although despite this unusual preservation, Ezabeth insists on wearing a veil over her face… 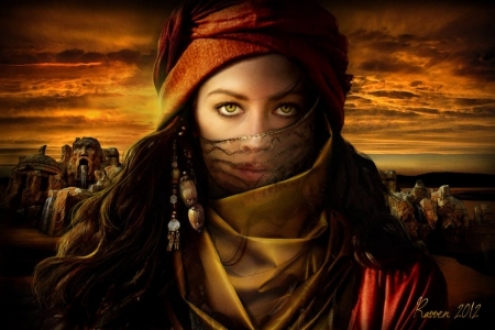 The novel is a journey to perceive the true nature of things, when the usual means of understanding have gone dreadfully awry. Place and sight are of little use, as is language: in this world, a Bride is a vast sensual creature whose erotic power is deadly and a Darling is a possessed child, so dangerous that just one loose in a city is enough to create an exodus. The only constants in Galharrow’s world are his two companions and his love for the extraordinary Ezabeth. The latter influence is a force of tender but extreme power; made stronger by the contrast between glorious past and hideous present. 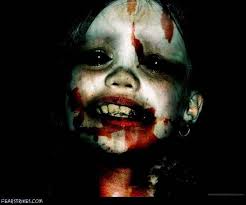 Despite its big heart, fans of gore and horror (yay!) will not be disappointed. There is a satisfying, visceral feel to Galharrow’s narration; for all the ambiguity that surrounds him, he is happy to hack, torture and menace his way through whatever petty bureaucracy or state bullying stands in his path. He is an effective warrior, but not a sociopath; indeed, one of the most relatable things about Galharrow is his matter-of-fact approach to both the uncanny and the inhuman. People are often more resilient than writers and politicians give them credit for, and if there is an antidote to both the nightmare of the novel and the real-world insanity it so accurately reflects then it is that determined loyalty creates its own luck and resolution. 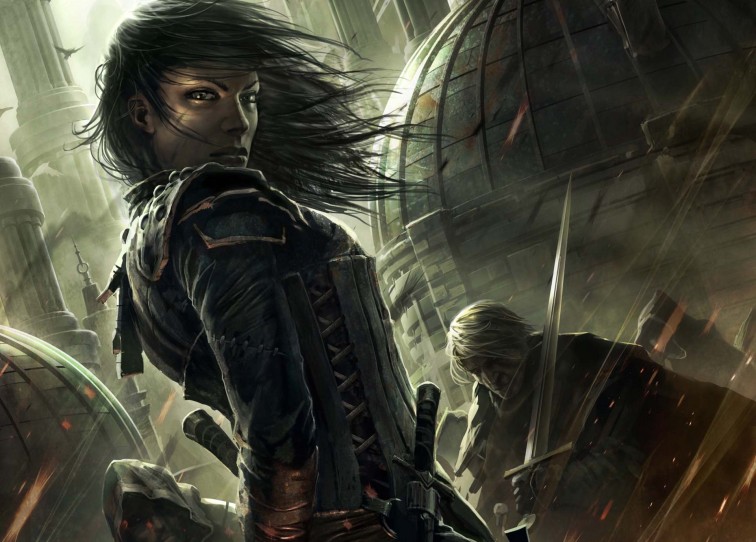 The author is an expert on medieval weaponry, and the fight sequences have a gruelling authenticity that helps ground the story. These scenes are not too long either; Galharrow is very realistic about his chances in combat. He has a refreshing knowledge of how much one man can achieve in a short space of time; how many opponents he can take on at once (two) and just how bloody tiring fighting is. There is no ‘Battle of the Five Armies’ nonsense, in which a few dwarves slaughter an entire army of much larger beings; fighting is work and work is hard. The sense of it being a skill comes across clearly; for all its baleful outcomes, it is at least honest, unlike the machinations of the city leaders and higher echelon wizards.

The military understanding is worn lightly, but well. It is merely another form of power, to go with the magic wielded by Ezabeth or the Darlings. That it is quickly used up is one of the quieter tragedies of the story, particularly in the fate of the Iron Goat, a great general whose skills from another age push him from total authority to being ignored and the inevitable lonely outcome; his only companion is Galharrow, who arrives too late; knows what to say and think, then moves on.

The book’s resolution is fitting and, even given the twists in reality leading up to it, unexpected. It’s also very moving and you are with Galharrow and his dreadful friends until the end.