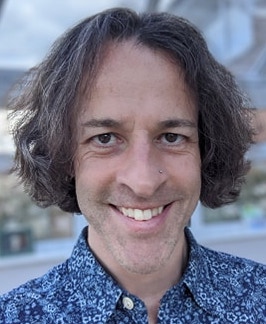 This is where I talk about science fiction, fantasy and the creative process. The site is called Life In Sci-Fi because my relationship with reality has never been close.

My newsletter is a mini-mag full of SFF recommendations, reviews and articles you won’t find anywhere else. Sign up and get a FREE NOVEL – the far-future science fiction thriller The Outer Spheres (‘Grips you like a crazy lover and doesn’t let go’). To subscribe, click here.

My latest book is Celebrity Werewolf, published by NewCon Press. The audiobook can be got here. I also wrote the Diamond Roads books Sons of the Crystal Mind [FREE on Kindle] & The Outer Spheres. The next novel in the sequence, Beautiful Gun, launches later in 2020, and my fantasy novella Dread & the Broken Witch will be published by Luna Press next year.

I love performing my work, and have done so at Virtual Futures, the British Science Fiction Association, the BioFutures Festival in Vienna, and Ytterbium EasterCon. My solo show Deviant Database is made up of five Black Mirror-style near-future nightmares, and will premier when we are next able to get together! A book anthology based on the show, also called Deviant Database, is being published by NewCon Press.

I narrate and produce audiobooks at a very competitive price. If you’d like a quotation, please get in touch. I’m also on Twitter @AndrewWallaceDR and have a Facebook page called Andrew Wallace Books.

Previously, I was a scriptwriter, and productions include Byron and The Scissors Angel on stage; Wonderworld and Look Away Now for radio & Burn Your Phone on TV. I also wrote for The Bill and Space Island One. Film commissions include a feature length script of acclaimed short The Cutter and an adaptation of the novel As Good As It Gets. My comedy shows The Free Three & Seething is Believing premiered at the Edinburgh Festival, and I also ran a London night called Comedy Rocket.