We’ve all been there. Your village relies on an ancient Relic no one understands but which the economy relies on anyway, like Bitcoin. At the annual ritual in which the Relic ascribes professions and even names to the young people of the village, someone breaks the Relic and that someone is you. Then the sky breaks open, weirdly gifted strangers appear and all your friends want to kill you.

Such is the opening of Lucy Hounsom’s Starborn, in which seemingly luckless Kyndra is the kid none of us want to be, but probably are (regardless of actual age). Not since Katniss put her hand up to take her younger sister’s place in the Hunger Games have I been rooting for a protagonist with quite so much empathy as this one. That none of it is Kyndra’s fault only adds to our interest in her, as does her status as child of a single mother, very real confused grief and decisions that put the interests of others, particularly her stepfather, over her own.

Granted, she has little idea of what she is agreeing to in her deal with a strange visitor called Bregenne, whose blindness eases under the light of the moon and whose uncanny healing powers are very like those in the storybook Kyndra owns about a magical race called the Wielders. Kyndra’s choice is wholly understandable though and besides, we want her to go with the strangers if only to find out more about them.

Kyndra wants to stay, however; through a combination of confusion, fear and rebellion that is both youthful protest and an innate part of her character. Kyndra’s insistence on staying in a place that has turned on her so suddenly is part of the theme of loyalty that knits the story together. Throughout the book, characters resist or comply according to power structures they barely understand, even at a higher social or magical level.

Kyndra herself begins to suffer powerful visions of a destiny that appears to have already taken place, not that this seeming anachronism prevents the condition being dangerous to everyone around her. Inadvertent destruction while engaging in a past that may not even have happened – at least not in the way everyone accepts – makes this epic fantasy wholly relevant as demagogues in our time employ sentimental imagery at the expense of anyone ‘different’.

Unfortunately for Kyndra, she turns out to be more different than even her mentor Bregenne realises, and there are some uncomfortable scenes in which Kyndra is tested almost to destruction as a means of drawing out her potential. The insistence of the ruling Council on proceeding with these measures simply because they worked before shows the dangers of a rigid hierarchy, even when it is informed by magic.

The magic system in the novel is based on the sun and the moon, with different Wielders accessing the power to create, heal and destroy at different times of the day. The Starborn are the most powerful of all, with the ability to shape continents and even reality through the power of the stars themselves. There can only be one Starborn alive at any one time, and the last one betrayed and then destroyed the great city of the Wielders five centuries earlier.

It’s giving little away to say that there is more to all this than appears; what is significant is the complexity of the characters’ motivations. Often we feel we are in a familiar genre situation to do with, say, bullying at an educational establishment that deals in magic; then the author will twist the story unexpectedly. One young male antagonist, for example, is motivated by love for another older and more powerful male character who manipulates him, rather than simple hatred for Kyndra.

There are a couple of great trickster characters as well; including the dashing Kait, who is a sort of female Han Solo with great hair and whose agenda, while opposed to that of her rival Bregenne, is perhaps not as evil and deluded as Kyndra is led to believe; and Medavle, who you know is going to be trouble because everyone tells Kyndra to stay out of his way. Sure, his name sounds a bit like ‘devil’, but he is engagingly mischievous and also saves Kyndra’s life. Medavle too has unknown depths; part of a powerful species bred specially for service (there’s that nasty hierarchy again), he acts as he does because he believes himself to be alone.

It’s another example of how magic does not make the lives of the Wielders any easier. They are susceptible to the same pettiness, anxiety and fear as those who do not share their gifts. The novel is very successful in depicting these dynamics, especially when conjoined with tensions brought about by unfair power structures.

But it is in the character of Kyndra that the novel really succeeds. A decent soul, she is horrified when she feels she is letting everyone down, from the people in her village to Bregenne, who shoulders the blame when Kyndra fails the tests. It is a strength of the writing that we share Kyndra’s sense of responsibility for this situation, even though none of it is her doing.

The most significant aspect of Kyndra is that she is a female protagonist in a successful epic fantasy, along with two powerful mentors in Bregenne and Kait; all of whom not only have agency and significance, but are the whole point of the novel. It’s worth making clear as well that the male characters have heft and importance, particularly the thoughtful Nadiah. Nadiah is a healer, which is normally a role ascribed to female characters; his skill at it in this story is in no way emasculating; indeed, the quiet subversion creates a very original character. Kyndra, then, is in good company as she negotiates a dangerous but often beautiful fantasy landscape.

Books two and three are out now: 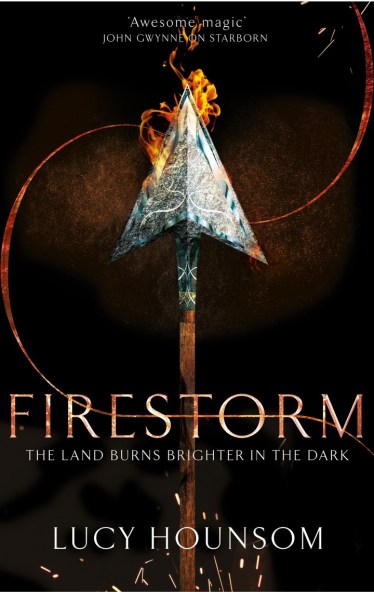