Super Relaxed Fantasy Club is one of my favourite things. It’s a monthly meet-up with fans of fantasy and science fiction in London. Starting some years back in the foyer of the Royal Festival Hall, it then moved to the rooftop entertaining space of a hotel near King’s Cross, spent time in that bunker-with-bar-and-books space under Waterstones in Tottenham Court Road and for the last year or so has been happily ensconced in the HQ of Hachette, one of the biggest publishers of genre fiction there is.

From March SRFC will have a new home once more; not sure where yet, but if you haven’t been to the Hachette one it’s well worth it because the space is incredible, with one of the best views over London. There’s a piddling seven quid entry fee and you get booze and a free book. Frankly, I can’t think of a better deal and I’m not lacking in the imagination department.

Last night featured ace readings from three very different authors. Note, the naughty Oxo Tower has photobombed all of them, as usual. 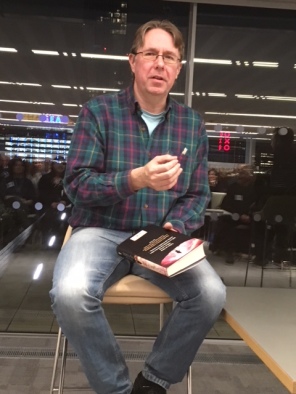 Alistair Reynolds is one of the big hitters of the SF scene. He writes space opera and rightly so, because he is an astrophysicist who worked for the European Space Agency; put another way, the man is a rocket scientist so shut up and listen. Last night, he read from his new novel Elysium Fire (published by Gollancz), which deals with the timely theme of how even the most perfect democracy can go a bit funny because of, well, the people who constitute it. The book also features whip hounds. Yeah, you read that right. If I don’t get a whip hound for Christmas there is going to be trouble. 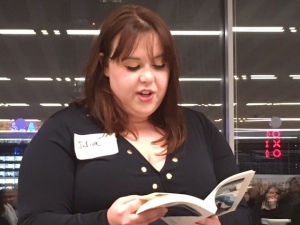 Julia Ember’s novel The Seafarer’s Kiss (published by Interlude Press) intriguingly splices a mermaid narrative with Norse mythology, and was heavily influenced by the author’s post-grad work in Medieval literature. The tale of an ambitious mermaid and a vengeful shield maiden, Julia’s reading dealt with a crisis in an ice fortress and ructions between ships and mer-people. Harpoons, the sun on beautiful scales and Loki as the antagonist means this book scores high on the entice-ometer I’ve just made up specially for it. 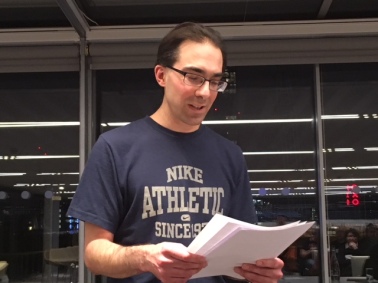 Daniel Godfrey read from his brilliantly-titled novel The Synapse Sequence (Titan Books), out this June. The story looks at the clash between two competing technologies, each of which have advantages specific to certain agencies. An air-crash investigator made redundant by more efficient AI pilots takes a job with a new company that collects data for criminal investigations, using a device that blends witness memories into a virtual realm. Will such an innovation wrap the investigation up nice and neatly? I’m going to guess that it won’t…