There is a complex, even thrillerish galactic conspiracy plot at the heart of Tom Toner’s debut science fantasy novel, but that’s not really why you read it. Indeed, the threads of that plot are so disparate and spread out over so many years (and light years) that the reader simply has to accept what is going on, without having to engage the usual puzzle-solving faculties in a fictional conundrum of this kind.

Instead, as in Gene Wolfe’s Book of the New Sun, which The Promise of the Child resembles, the best way to enjoy the novel is to treat it as a journey through an extraordinary world in which disparate characters engage in a huge variety of other-worldly stories and situations. Often fantasy can feel like a travelogue, and at times there is a sense of that here, but the author’s deliriously inventive use of language always ensures the narrative is compelling. He understands too how to balance the familiar and the strange, so that his epic tale of post-humans adrift in an eerily empty universe never feels fragmented, or less than its impressive whole.

Instead of an unreliable narrator, we have a densely imagined, layered galaxy where apparently simple actions, like a fishing trip or a visit from an official, are the result of either formidable plans or a history so vast it is an almost tangible force. It can seem confusing; but it isn’t, just accept that this is an unusual narrative, patiently told with detail that sticks, like the metal that grows on trees (and piles up when not harvested) or the use of silk as currency because no one remembers how to make it.

Set over a hundred centuries in the future, humanity has evolved into different species that have elements in common with classical fantasy tropes: the giant Melius, the elven Volgar with their pointed ears and the immortal Amaranthine. The latter are in charge, living in vividly depicted Vaulted Lands, which are hollowed out planets with internal, artificial suns. We follow a character from each species as they are uprooted from their lives to undertake perilous journeys through landscapes that are simultaneously beautiful and terrifying.

The author has a degree in fine art, so everything looks great; from the huge bridge to nowhere at the heart of a siege to the brightly-coloured Melius; to the starships that are no less bright and incredible for being ancient to the sentient birds who seem like friends until they rather horribly aren’t.

However, the rest of the senses are engaged just as fully. When we follow a starship crew on a desperate journey across galaxies, the sequence has the visceral feel of the best movie car chases. It’s all analogue too – there’s a good reason for this, and it is revealed at the end – so the ship uses radar. As a result, outer space as experienced in the confines of the tough but increasingly battered vessel sounds incredible: stars are screams; planets hiss and other craft are menacing echoes. It feels like the depths of the book’s weird future Mediterranean, which is part memory and part other world, populated by uncanny, lethal sharks who are more than they seem.

The novel makes serious and very contemporary points about colonialism, privilege and race. The Melius are judged according to what colour they are; so the innocent, virginal protagonist, Lycaste, is scapegoated and dismissed as a ‘Cherry’ because of his low status and red skin. The Meilus are big because they are more useful that size – all the way up to the Jalanbulan Melius (one of the many great earworm names in the book; see also ‘Prism Investiture’): huge, troll-like tusked and multi-fingered warriors whose name and role hints at the British Empire in India. It’s a connection made clearer when we find that the various power bases are called ‘Satrapies’, run by the same entitled white male psychopaths who are in charge now. Indeed, there are few female characters in the book; the ones we do get to know are Lycaste’s unattainable love objects. I wasn’t sure if this omission was an oblique comment on patriarchal power structures surviving into the distant future, and perhaps future volumes will make things clearer. Certainly, the presence of female space-faring dinosaurs (yes, you read that right) implies there is yet another astonishing world in the Amaranthine Spectrum beneath the many already encountered.

Book two is out now: 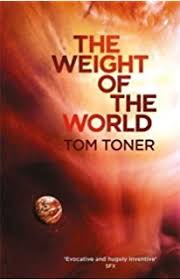 Buy ‘The Promise of the Child’