The unfortunate subject of politics

Advances in real world technology and medicine add detail to the understanding of the human mind. However, has society ignored the need to develop individuals and given them technology instead? It could be why people are so willing to give control up to technology, for example in the many instances of cars ending up in fields or on beaches because of blind trust in a satnav.

Yet we don’t want technology to become too intrusive. Excessive machinery plugged into our physical selves feels like it erodes our humanity. There is a sense of needing to be cautious about who or what we invite over the threshold. Perhaps this deep-wired association is the reason we personify technical problems as demons.

Despite the technology behind media like the Internet, science itself is not always a great means of communication. People respond to patterns in the form of stories and feelings, so the science tends to be hidden. That arrangement is fine if the science isn’t pushed out altogether; however, this tendency is has a strong influence over contemporary politics.

The anti-scientific views of reactionary, populist figures harking back to a past that never existed are pure fantasy. It’s not as if there aren’t precedents: the Nazis were great at that sort of thing. Science and science fiction use fantasy to ask ‘what if?’ Reactionary politicians do everything they can to avoid that question. Calling such idiocy fiction does fiction a disservice; fiction is an exploration of human consciousness, not a manipulation of it. 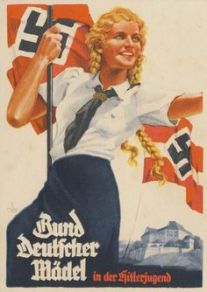 This exploration is worthwhile, because there is little scientific thought that teaches us to accept our lot. Many long-established cultural myths, particularly religions, tell us that we are born into pain and that’s it. There are regional variations; Buddhism for example promotes immortality through personal development, while the true meaning of jihad is an inner struggle to better oneself and the world in the eyes of God.

Perhaps the simplistic flag-waving can itself be used a means of asking scientific questions, especially when persuading people that something is broken often takes more effort than anyone realises. People can get tired of having to think all the time, which is where fantasy in all its incarnations comes into its own. After all, while evolution may be dismissed in some fundamentalist quarters as fantasy, it is nonetheless a fantasy that has assisted in our understanding of cancer and the steps towards its eventual cure.

Afterward: four days before this post was published the United States of America pulled out of the Paris Climate Accord. During his election campaign, the current president claimed that climate change science was a hoax.