William Gibson is a very long man. Until you actually see him in person, you don’t realise how long he is; his legs alone seemed to dwarf the interviewer. It’s one of the unexpected characteristics of an author I have admired since 1991, when I first read that great opening line ‘The sky above the port was the color of television, tuned to a dead channel’. Another surprising trait given the dizzying pace of Gibson’s writing is how laid back he seems. Of the numerous author events I have attended, this one at the Tabernacle in North London on Monday to discuss Gibson’s seminal science-fiction novel ‘Neuromancer’ thirty years after it was published, was the most relaxing. That isn’t to say the packed audience didn’t hang on Gibson’s every word.
Gibson, uninspired by space travel and of the view that post-apocalyptic tales were the preserve of ‘very young men with limited life experience’ sought a new arena in which to set his science fiction stories. Walking through late 70s Vancouver, he noticed how the body language of kids playing the new video arcade games displayed a unique physical dynamism, as if they wanted to reach through the screen to physically manipulate the nominal world beyond. Later, observing an ad for a new, briefcase-sized Apple computer he pictured the device as a means of accessing the shared video game universe from anywhere in the world. Here was his spacecraft; his vehicle for travel into a dazzling new realm he was to call ‘cyberspace’.
Early stories garnered critical attention and he was unexpectedly commissioned to write a novel, years before he thought he was ready. The novel was ‘Neuromancer’, from which that haunting first line comes. The novel goes at the same speed as Gibson’s subsequent career; winning numerous awards and selling over six million copies.
From the seductive imagery of virtual code structures generated by powerful companies to the dense prose of the novel itself the reader is not so much immersed in an alternative reality as taken prisoner by it. To reach the end we are forced to understand often bizarre inventions, which we accept because the adventure is just so damned cool. Its troubled low-life characters have an innate, almost desperate need to engage with astonishing technology; their understanding of it and the fabulous, terrifying world it enables becomes ours.
‘Neuromancer’ cleverly engages with the imaginative reader’s desire to avoid the ordinary at all costs. This contempt for the middle lane is best expressed by the plight of employees in an office block, driven crazy with drugs and psychotropic imagery during a raid by the gloriously named Lupus Yonderboy, and by the grisly fate of the boring Turing Police. “The Turing Police turn up for a chapter, tell Case he’s been a bad boy and are then chopped up by some kind of gardening robot,” Gibson recounted, revealingly vague about the details.
Such is the compulsion to join in with burned out hacker protagonist Case and avoid association with the mediocre that we overlook details like how exactly the futuristic computers are operated. Once Case has fixed an electrode to each of his temples to access cyberspace he uses his hands somehow but what exactly does he do? Gibson elaborated on this point. “It’s not typing,” he said; “they aren’t entering code”. What, then? It doesn’t matter. Part of the mystique of the novel is what it leaves out, not least a fair bit of exposition. This daring construction means readers have to work twice as hard, coming as close as possible to the world of the novel through sheer imaginative effort.
Gibson provided insight into his delirious, almost reckless characters. When asked about favourite books from his English Literature degree course, he unexpectedly mentioned EM Forster’s ‘Aspects of the Novel’. Forster’s assertion that an author who knows their characters well isn’t doing the work was a revelation to Gibson. As a reader it’s possible to sense that lack of dictatorial control in the thrilling amorality of Case and his fascinating colleague Molly, who has mirror shade sunglasses embedded in her eye sockets and uses stimulants to run on a broken leg.
Gibson explained how the character of Case was distilled not from pristine SF heroes but from listening repeatedly to Bruce Springsteen’s ‘Nebraska’ with its songs about blue-collar desperados criss-crossing America. Case brilliantly expresses the narrative appeal of a working class guy on a seemingly doomed journey. He’s an addict, both to drugs but also to the exhilarating lure of cyberspace; he will do anything to get back there, even accepting a job he shouldn’t.
Gibson elaborated on the noir elements of the novel, explaining how the tone was more Jim Thompson and Dashiell Hammett than Raymond Chandler. The Tessier-Ashpools too are one of those gone-bonkers-with-too-much-money-and-power families the private eyes of the 1940s were always getting entangled with, usually to their cost. Gibson offered a priceless description of this decadent family’s dwelling as a ‘sub-orbital Vegas with a mini-Gormenghast stuck on top’.
Another inspiration was Alfred Bester’s ‘The Stars My Destination’, which Gibson discovered in serial form as a boy in a pile of forgotten ‘Galaxy’ magazines. ‘Neuromancer’ shares the earlier novel’s narrative drive and love of invention but perhaps unsurprisingly Gibson prefers Bester’s original title ‘Tyger Tyger’. Like the beautiful but fearsome beast of Blake’s poem, the Sprawl and the icy alternative realities of cyberspace burn brightly in the forests of the night.
I asked William Gibson if he thought today’s cyberpunks are the kind of individuals who create viruses to destroy our home computers. He said those people are more likely to be the business leaders of tomorrow; that there are no actual cyberpunks now, just cyberpunk things, like haircuts. He then came up with my favourite line of the evening. “Cyberpunk is a legacy term,” he said. “But then, real life is also a legacy term”… 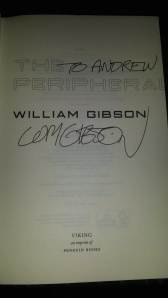 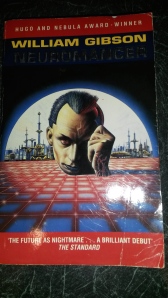