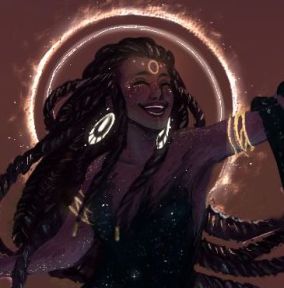 It’s certainly an interesting time to be talking about Dread & the Broken Witch. As you can see from the lovely pic, the Broken Witch is a black woman, and she is a trans woman as well.

The book is a novella, albeit a long one. Novellas are the book form between short stories and novels, and generally run from 20K words to 40K. Dread & the Broken Witch is 35K, so about half the length of a novel.

I mention size because it was my first novella, and was also the first book I wrote after a nervous breakdown at the end of 2015, with a subsequent year living with anxiety and depression. I haven’t written about this subject before, because despite my racket I am a private person. However, I have been strengthened by the honesty of others, especially friends on here, and by a political situation I find – have always found – intolerable.

These things are linked. 2016 was spectacularly bad for many people’s mental health. It exacerbated an already terrible situation in my own life, which compared to many other people’s is incredibly privileged: white, male-presenting most of the time, great physical health, Southern English – Jeez, I’d won the life lottery even without factoring in my incredible genius and beauty (as you can tell, I’m better now). That became part of the problem – I had all this great stuff so how could I be so unrelentingly shit? I felt I was better off as a collection of body parts best used by someone else.

That’s the thing about depression. It turns you against yourself. There was I, who had done stand-up at the Comedy Store, unable to even speak. There was I, who had worked for years as a crisis manager, and I couldn’t even do the washing up. Worst of all was that I couldn’t write for almost a year. That may sound like the most snivelling kind of first world problems, but if you are a creative person it is a kind of living death.

What got me through was reading. I’ve written elsewhere on this page about the writers of colour who inspired me (NK Jemisin, Kai Ashante Wilson, Nnedi Okorafor) and it was then that I read them. So thank you, guys.

With the love of a great family (there’s that luck again) I began to come out of the depression enough to consider writing a short fantasy novel for an open submission – which is where an author without an agent can submit work. The publisher didn’t want the usual sub-Tolkien stuff, so I thought about a world I had created for another fantasy novel called Jester at the Court of Night. That damn thing nearly drove me crazy, so I put it aside. But one element burst into life, which is that the Jester’s kingdom is engaged in an Iraq-style misadventure in the continent we call Africa, and which in both books is called Zabardu. Why not set the story there?

Dread & the Broken Witch takes place around 6,000 years ago. Instead of the evolution of the Abrahamic religions, genuine other-worldly beings appear, change everything, and then mysteriously depart. They love the people of the Earth and mate with them, and the offspring are the witches and wizards able to channel the interconnected magical world force called The Way.

I wanted a trans character for so many reasons. Probably the main one is that I have always struggled with gender identity and sexuality, because our culture does not handle these things any better than it does race. The Broken Witch is a defiant rebuttal of all that. The ‘brokenness’ of the witch is nothing to do with her gender identity, it a mystery at the heart of the story so not something I am going to reveal here. Instead, the Broken Witch is a person who has always known who she is, and in her youth used magic to match her inner and outer realities.

She is lush, brilliant, kind, promiscuous, rowdy, outrageous and hard as hell as she approaches middle age with no memory of what happened to her in the war in the north that robbed her of her powers fourteen years previously. She is bold, often makes mistakes but will always apologise when she knows she is in the wrong, which is often. She is someone you would want as a friend, while also being mysterious, to her beloved village and also to herself, because while she might have known who she was in her youth, now things have become blurred, and a strange darkness is closing in…

Zabardu, my ancient altered Africa, is both a continent and a single country. This choice is deliberate, although I recognise that calling Africa as it is now a single country is wrong. I happily concede that you wouldn’t read a science fiction or fantasy book by me about contemporary Africa, you’d read a story by one of the authors above, or by Tade Thompson. But I wanted to explore the uncanny beauty of the place as a continent of the imagination, made of love. Zabardu is not without its problems, but it has a utopian feel to counter the famine images Western kids have growing up, and the false narrative that Africa is a basket case that needs a jolly good tidying up by white racists.

I’ve written a very personal fantasy here, informed as much by my imaginings of the continent over the years as much as things I have learned and the people I have met. For example, there are no borders, because borders are artificial constructs. There is no toxic colonial legacy, because the book predates it – although the predations of the northern realms that are that world’s version of Europe are an important theme, and a threat as great as the Dread.

The Dread itself has elements in common with depression, and similar language is used to describe it, but it is not depression. The idea came from, of all places, the Edward Albee play A Delicate Balance. Albee, who like me was adopted, had just died when I wrote the book, and something about the idea of a story in which a wealthy couple whose evening is interrupted by neighbours driven from their house by ‘a nameless dread’ scared the hell out of me.

I can’t say why, exactly. Maybe it is the incomprehensible scale of what we do not know, or a glimpse of the true infinite, or the breaking through of a reality we have not evolved to perceive. That such a phenomenon could erupt into a suburban world that is supposedly the quintessence of safety makes it even more eerie.

I also wanted to subvert the epic quest narrative. Instead of a trek through Shire/Moria/Mordor analogues, the Broken Witch embarks on a more intimate quest – from one side of the village to the other. The obstacles facing her are no less daunting or difficult, but the scale is more immediate.

I went overboard on the intimacy, however. I feel strongly that an element of the fantasy genre that is often neglected is sexual, and crafted a narrative accordingly. However, even very positive beta readers mentioned that there was too much sex. It might be why the novella was rejected by the publisher, and took another four years to find a home with Luna Press (the novella will be published next year). In the meantime, 10K words have been replaced, to create an entirely new arc to complement the dramatic conclusion.

My little book isn’t going to solve the problems we face. It’s a fantasy story that has a big heart and goes places fast, with a character whose qualities I aspire to. It will go its own way, and other than telling you about it there isn’t much more I can do. But if it helps or inspires anyone else the way it did me in my personal darkest hour then perhaps its time was always going to be now.