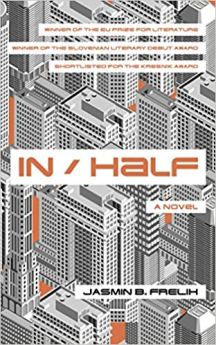 This is the first Slovenian novel I’ve read, and it does a nice line in snarky, brutally honest character analysis, particularly of the Wolf family, whose part-demented/part-deeply ordinary relationships mean a fiftieth birthday party takes almost a year of emotional chess to arrange. The book is set twenty-five years in the future, and looks at how millennials respond to a fractured world as they reach their fiftieth year. Three of them – ex war minister Kras, poet Zoja and theatre director Evan – negotiate various personal crises following ‘The Cut’ of 2011, during which a solar storm wiped out the Great Cacophony (the Internet), giving rise to totalitarian politics that split society still further.

Various robot helpers, who exist despite the absence of a replacement for the Internet, either assist or get in the way without adding anything particularly science-fictional, and feel like what we could get in the next few years rather than a quarter-century hence. Indeed, the SF is pretty much non-existent; the book has an 80s or even 70s feel, which is hardly surprising given Western culture’s tendency to consume little other than itself.

The slight unfamiliarity of the translated language throws this texture into sharp relief, and it’s emphasised by none of the main characters beginning their story at home – Evan is in Japan, Kras is at a family retreat, and Zoja is in America. Everything is divided, hence the book’s title. If only the author had harnessed that idea to something truly science-fictional, the story might have engaged at more levels – albeit troubling ones. A trans character is abused, while the robot responsible for ‘sponsoring’ (babysitting) Evan in Japan ends up giving him a mecha blow-job that goes predictably wrong. However, the book doesn’t do anything that original with the idea of what middle-aged millennials will actually be facing.

Other elements are just infuriatingly wrong; other than performance geeks like me no one gives a toss about experimental theatre now and I don’t believe that just because the Internet has died there won’t be some future alternative (telly?), so where Evan gets his budget from is a mystery. Also, and most inaccurately, fascism is on the rise because of social media and the Internet, not in spite of it. Ultimately, this is an interesting literary novel with a bit of SF tacked on.