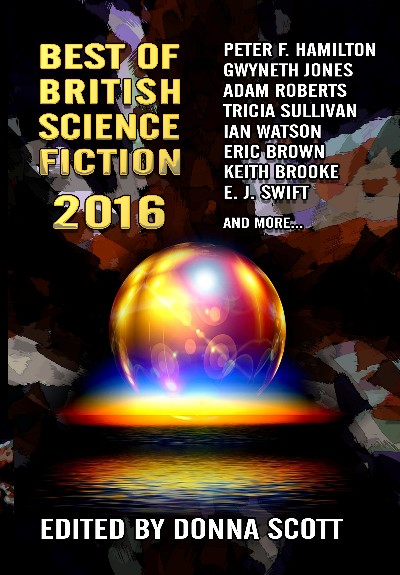 SF has always explored the boundary between dream and reality. In 2016, however, this liminal realm became political real estate, with the lamentable outcomes we are still coming to terms with. Some of the stories in this exemplary collection tackle these outcomes head on; with tales of a killer meteor named after the awful US president and a vision of a disintegrated UK in which every region has become autonomous. This latter story, ‘Staunch’, has a line that could sum up both the collection and contemporary cultural reality: ‘they take the first explanation they’re offered, either because they want it to be true, or because they’re worried it already is.’

In other visions, plants are artificially evolved to synthesise information the same way they do light (the sublime ‘How to Grow Silence From Seed’) and aliens unleash a weapon that removes the number ten from consciousness (‘Between Nine & Eleven’). Stories like these last use artificial psychological states as weapons; in another, the titular ‘Dream-Hunter’ finds the tables turned on him by a repentant murderer.

Unreality, then, is as lethal as the physical violence of the harder SF or dystopian environments depicted in the collection (‘Arrested Development’); in ‘Montpelier’ data is used as an actual drug that turns out to be devastatingly addictive. Dreaming is even used to travel in time; in ‘Ten Love Songs to Change the World’ a teenager frustrated by the inability of her timedreamer gift to improve the world makes an extraordinary decision, riding the consequence wave to its devastating end.

There are artificial dreams: who is the mysterious ‘Seventh Gamer’ in an immersive game world? Is he fake news, a rogue AI or a genuine alien ghost in the machine, like the catastrophic but relatable extra-terrestrial presence in ‘The 10 Second War’. Not all the wars are that short; in ‘The Lightship’, humans and aliens have been slugging it out for two centuries for what turns out to be a vanity project for, you guessed it, an idiot alien president.

With dread inevitability, the ever-popular Nazis make an appearance in ‘Heinrich Himmler in the Barcelona Hallucination Cell’ (my favourite story title, against stiff competition); in which ‘decadent’ art is used to disorient prisoners of the Franco regime, a facility Himmler insists on inspecting – or does he? Meanwhile, ‘The Apologists’ are aliens who don’t fight a war with Earth so much as wipe it out by mistake, an absurdity that feels less fantastical by the day.

The way these stories resonate shows the skill with which the collection has been compiled. For example, in ‘The Apologists’, the aliens are trying to recreate Earth for its now homeless inhabitants, while in ‘Foreign Bodies’ benign aliens have rehoused humanity in an evolving artificial environment while they repair our home planet. ‘People, Places and Things’ does the opposite; the world, for reasons unknown that feel somehow karmic, is being unmade: everything is disappearing as if it never was.

Offsetting this bleakness is terrific emotional power; ‘People, Places and Things’ is a father/son story with the twist that it’s the younger man who’s the alcoholic. The collection is topped and tailed by mother/daughter stories with the characters under extreme duress. The climactic tale, ‘Front Row Seat to the End of the World’ has an ending that feels absolutely right as you realise where the real story lies.

Families are the core of many of the stories, with an interesting through-line of regret. As with ‘Arrested Development’ the child in ‘Adjenia’ is not quite what we expected, while ‘Possible Side Effects’ sends a father on a faster-than-light trip so that when he returns there will be a cure for his cancer. The journey will only take 132 days for him, but forty years will pass on Earth…

Many of the stories deal with the ambiguity of loss; whether it’s a wife who thanks to a nano-enabled intimacy is still a presence despite being dead (‘Joined’) or a lapse of faith and, subsequently our understanding of the universe and our place in it (‘Beyond the Heliosphere’).

2016 was a year of losses after all, from loved entertainers to the post-war Western political consensus. For all that, the collection is full of irreverent humour, with great comic twists in ‘To Catch a Comet’, ‘Shooting the Messenger’ and ‘Ana’. All the stories feel like they are about our world, now, regardless of whether their actual setting is somewhere on the Final Frontier.

Two of these stories, ‘The Apologists’ and ‘Liberty Bell’ were subsequently nominated for British Science Fiction Association Awards with ‘Liberty Bell’, a literally star-crossed coming-out story, going on to win. It’s a measure of the exceptional storytelling in this fantastic collection.

It’s worth reading the stories in the order they are arranged. That way, the sense of a greater whole begins to emerge: a small, idiosyncratic and deeply humane antidote to the year in question. Here are the stories and authors: 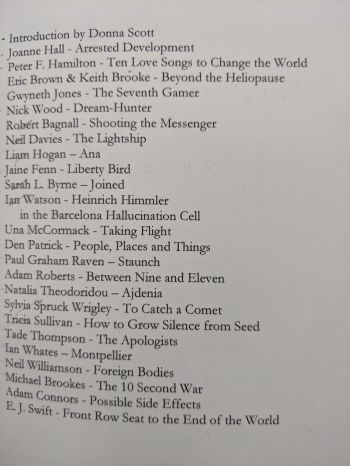