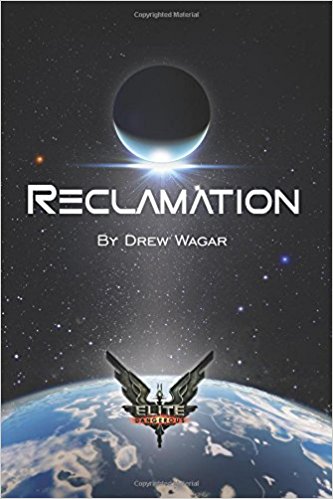 I read a lot of great SF books in 2016, but this is the only one that had me thinking, ‘I fancy being that character’ or ‘I could do that, if only I was good at flying and the fictional universe existed’. Well, in a way it does, because this novel is the first official tie in of the new ‘Elite: Dangerous’ gaming universe. I remember the original game from the 80s but didn’t realise the great Robert Holdstock had written a novella to go with it. In keeping with that dynamic, Drew Wagar contacted Frontier, the producers of the game, and asked to write a new version. After a ballsy (and lengthy) Kickstarter campaign ‘Elite: Reclamation’ was published.
It was well worth the hassle. I’m aware of the contemporary Elite gaming universe but haven’t played it; however, this book works splendidly as a stand-alone piece, with the Elite mythos and technology functioning as a series of intriguing textures rather than the exclusive preserve of those who know how to play the game.
Indeed, the novel has a literary boldness that a wholly independent novel might not have got away with, not least because Kahina, its young female protagonist, is so bracingly amoral. There are a couple of scenes where her ruthless single-mindedness echoes that of Gulliver Foyle in ‘The Stars My Destination’; the standard of fictional intergalactic bastardy against which all others are measured. And yet for some reason we care about her. Perhaps it’s because she is an outcast within her own imperial family; her dark hair regularly remarked on as an aberration in a family of fascistic blondes; her beauty of the striking kind rather than the anodyne, enhanced good looks of her two uber-bitchy sisters, who still require over a day in makeup in a society that has developed travel via hyperspace. Imagine a Tarantino-in-space version of Cinderella in which the older sisters are ugly on the inside, everyone gets literally slaughtered at the ball and then Cinders blasts everything to, well, cinders.
Perhaps we, and the male characters who assist Kahina, love her because she is so unapologetically herself, despite beginning her adventure in a state of amnesia. Stuck up and entitled, she is also brave, clever and competent. On more than one occasion it is not clear how she will get out of the various scrapes she finds herself in through no fault of her own. Even when times are good she is bullied, then witnesses a truly nasty massacre, then is stabbed to death by her trusted mentor. That sequence in particular had me checking how many pages were left as the story seemed to be unequivocally over; always a good sign in fiction. It gets worse for Kahina from then on, but throughout she is bold and authoritative, often amusingly so.
She is well served by a robustly imagined, very satisfying galactic conspiracy of a depressingly plausible kind. If ‘The Phantom Menace’ was an SF political thriller straining to be a kids’ movie, ‘Elite: Reclamation’ shows what it could have been in better hands. Neither the Empire, the Federation or the Rebels are anything other than a bunch of sociopaths and we only end up rooting for the Empire because Kahina is part of it.
She has many worthy opponents; from the Machiavellian diplomats whose ironic dialogue is often laugh-out loud funny but never quite slips into parody to Dalk, Kahina’s mentor, who is working so many angles even he seems to lose his way. However, by far the most fearsome is the gleefully sadistic Octavia, a beautiful but ageing cybernetic pirate who has adopted the Darth Vader approach to employee relations. Octavia wants Kahina’s body; indeed, she wants to be her by swapping minds as one would change cars. Poor Kahina will end up with the husk Octavia has worn out, while Octavia will get another lease of life as a fit young woman.
There is a sexual undertone to this desire but the main reason for Octavia’s pursuit is that she and Kahina are a genetic match. That they could be literally interchangeable says a lot about their relative natures; Kahina could easily end up like Octavia even if the latter’s plan doesn’t come to fruition. Much of the hidden dynamism of the story is to do with Kahina’s choice about which aspects of her nature she listens to: the part she inherited from her father, a man who sanctioned a nuclear attack on an undefended moon with predictably horrible results, or her companion Luko, who senses that Kahina’s true nature will draw her out to the stars.
This novel is a gripping, great fun read; a political space opera with a lot of justifiable twists, memorable characters and a fascinating milieu.