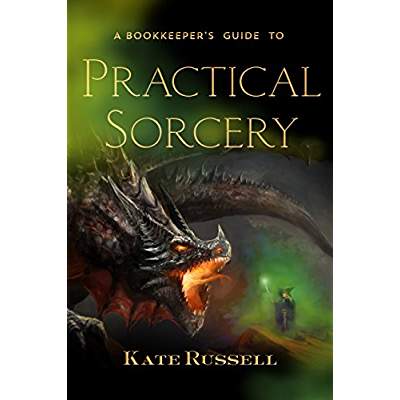 The title of this fun fantasy adventure for younger adults spells out the troubles faced by Henry Noble, an ambitious, talented youth of sixteen who dreams of becoming a wizard. Unfortunately, following the disappearance of his father on a trading mission two years earlier, Henry is the sole breadwinner for his mother and two thuggish younger twin brothers. He works in the accounts department at the castle, Terratonia being a loosely feudal society with a number of modern overtones.
At first, the dismal day job is a problem, not least because loathsome Chief Accountant Mr Colloid keeps deducting groats from Henry’s wages for lateness. Henry would rather spend his time chatting to Halcyon, the old Sorcerer Royal, who also lives at the castle and indeed never goes out following a traumatic heckling incident some years earlier.
Frustrated by Halcyon’s refusal to teach him about magic, Henry enrols at a night school for wizardry run by Gorman Dizing Enterprises, an organisation with suspiciously generous entry requirements and access to a line of credit for those unable to afford the hefty fees. There he meets the interestingly named D.C., a girl roughly his own age with an encyclopaedic knowledge of the magical arts but little in the way of either practical application or indeed practicality. However, the classes seem ill-informed, aimed at producing third-rate children’s entertainers and frauds; Halcyon is horrified at his young friend’s involvement in such nonsense, which prompts the old wizard into finally agreeing to train Henry in his spare time. The young man quickly learns the basics of a robustly-devised magical system, which ensures that the discipline he has learned as a bookkeeper has not gone to waste.
However, when Halcyon disappears and the castle guards start chasing Henry, the young man has to use every one of his new found skills. Forced to go on the same journey to the coast that claimed his father, Henry, accompanied by timid fellow bookkeeper Peter, travels into the dark forest to confront the evil forces at work.
As you would expect from a novel written by a keen gamer who is also a technical journalist, the magic system that lies behind the narrative is very well put together. Henry’s abilities are limited; he is not superhuman and spends a lot of time believably working through spells and occasionally getting them wrong. D.C., whose enthusiasm borders on insanity, provides useful knowledge and even characterisation of this unusual world. Peter, meanwhile, is the voice of reason whose reactions, although often inconveniently rational (eg running away or at least trying to), are entirely in keeping with how a normal person would react to, say, creatures more revolting than trolls who are loathsome jobsworths to boot.
At first glance, a boy wizard, his learned female companion and everyman best mate sounds a bit familiar but trust me, it isn’t. For a start, the ‘Harry Potter’ books are all ‘going to school’ stories and we meet the characters when they are eleven. Henry Noble is actually a young man rather than a boy and he doesn’t get to go to school – indeed, the school he does go to is useless and he quits after one lesson. ‘Practical Sorcery’ also lacks the horror of the Potter stories; it does not, for example, start with the slaughterer of a child’s parents. In terms of tone and narrative, this difference need not be a bad thing; elements of the later Potter books became so dark as to be almost impenetrable. ‘Practical Sorcery’ is a lighter piece and has more in common with ‘The Hobbit’, particularly in the journey under the mountain, or the Discworld novels, with their blend of the contemporary, humorous and fantastical. If there are to be future Henry Noble books, and I hope there will be, then I’d like to see these elements refined, with perhaps less authorial voice. I would also have liked to see Gorman Dizing Enterprises come after Henry for unpaid tuition fees even though he never attended, especially since you can do that sort of thing in the so-called real world and then become US President.
These are minor cavils, however. ‘A Bookkeeper’s Guide to Practical Sorcery’ is an enjoyable read in an accessible world that works just as well read out loud to children. There is also a brilliant twist involving a dragon, while the climax cleverly uses a whole set of ideas that have been layered in over the course of the story. Finally, I have accepted that we do not yet have teleports or a moon base but will settle for a desk that shrinks and fits in my pocket. Make it so.