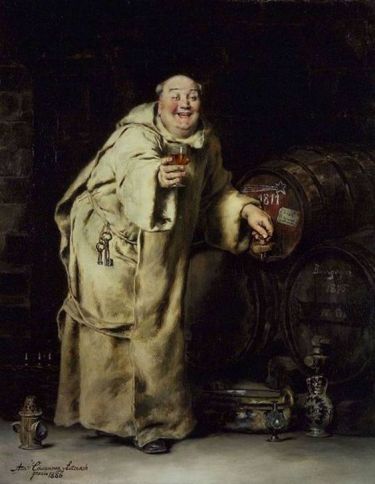 I want to make clear I’m not having a dig at any of the three things in the title; I’ll be honest, both religion and drugs have been a fun but not integral part of my life, rather like transvestism. Bit of dress-wearing and running about, it’s a very minor hobby.

Anyway, this BBC story on Thursday was about monks in the French Mountains, who have been making their own very strong liqueur since 1605 and last year alone shifted 1.5 million units!

And that’s not all. On a farm in California, there are some nuns who make and sell medicinal products based on ghanja. I was trying to think about what ailments drugs made by nuns could cure.

I need this heroin to cure me of withdrawal symptoms! I need this cocaine to heal me from the terror of being famous… without cocaine!

It’s like they heard Karl Marx say: ‘Religion is the opiate of the masses’ and thought, the cheeky fucker! And then they thought, hang about. Religion… opiate… We’ve got both of those! Why don’t we blend the two?

It’s a sure fire commercial hit, like ‘Batman versus Superman’. Sure, there are some ambiguities people are going to be uncomfortable with but let’s face it, they’re going to fork out anyway.

Unfortunately, these days the opiate of the masses is, in fact, opiates! Marx was clearly reluctant to cut out the middle man; probably a communist principle to do with compulsory full employment.

Anyway, I worry this whole drugs/religion dialectic is a gateway thing – you start by scoring an eighth of weed from Sister Mary, three weeks later you’ve bought fifty tonnes of horse from the Taliban – it’s a slippery slope, people!

I suppose there’s some reassurance from the concept of heritage and of history, which is ironic because memory is one of the first things to go after a night on the sauce.

But it’s a different kind of history I’m talking about here. It is unchanging, almost timeless. There’s no rush; no noise. There are even vows of silence, which must have been a bugger when they were trying to work out the beer recipe.

For all the practical shenanigans though, there is a romantic sense that by consuming a bottle of beer made by trappist monks [what do they trap by the way? Rabbits? Children? Or is that witches?] … a sense that by drinking this beer you are drinking from the tide of history as it has ebbed and flowed around a great monastery; a wonderful human edifice of calm constancy.

Or, and I must occasionally pay heed to Paranoid Voice, maybe they are trying to get us to pack in the good times by brewing an ale so gobsmackingly powerful that after it’s beaten us around the head for ten days after the party we’ll never want to touch another drop.

That would be bad for business though; the profits from brewing and whatnot help pay for upkeep of the monastery or nunnery and its charitable interests, like, I dunno, Alcoholics Anonymous?

And is it really an accident that the most finely distilled alcoholic drinks are called spirits?

It makes a lot more sense of that whole father, son and holy ghost gig, which I didn’t understand until I realised it was an expression of extreme drunkenness. There aren’t three of them – it’s just blurred vision. The third one’s a bit see-through, what does he do? Holy ghost! It does have the logic of the profoundly intoxicated doesn’t it?

There is something in the rule of three and being the same thing though. The three great Abramaic religions of Islam, Judaism and, for beginners, Christianity, are essentially quite similar. But within those you have orthodox, hassidic, shia, sunni, catholic, protestant… It’s like different booze brands isn’t it? Your polite anglican half of lager shandy all the way to your still-brewed inbred fundamentalist moonshine, which is a bit like alien acid blood but not as tasty.

Take Al Qaeda. That’s a brand that’s taken a kicking. 9 11 really was their greatest hits wasn’t it? From devastating the heart of capitalism to bullying little African girls.

And that’s not all. Yes 9 11 was indescribably horrible, and nearly as bad as everything that happened afterwards, but a lot of people were quite shocked to discover that the supposedly devout hijackers gambled, slept with prostitutes and worst of all GOT DRUNK in the lead-up to the big day.

Maybe ‘shocked’ isn’t the right word. Maybe… disappointed. Because if you’re going to set yourself up as a pure alternative to our way of life then I think it is incumbent upon you to PLAY WITH YOUR OWN TOYS.

Worse than making up your own psychopathic rules and then trying to impose them on everyone else is then proceeding to break those rules because maintaining them is just oh so very stressful. You have no idea. Piloting, crowd control. Ten pints of vodka and orange. Because you’re worth it.

It’s phoney, like people who refer to Jesus as ‘my man, JC’.

It comes down to sincerity again, and identity and of being the real thing.

The notion of trust is very, very powerful. We wouldn’t like it if an identical drink to the monk’s ale was brewed by prisoners. Yuk! Even if the prisoner’s were wearing chastity belts. I’ll let you dwell on that thought for just a moment… and then move swiftly on.

We trust those monks and nuns because they have chosen a different way, a way we perceive as noble. There is the added advantage of them doing a job that none of us want to do… like workers from overseas.

It’s about authenticity. As everything becomes more fragmented and simultaneously safer and more dangerous, we crave authenticity. What is real? Most jobs are nonsense, the corporate fairytale well and truly debunked now. Mission statements, lies about the economy, lies about car emissions, lies about risk.

In our defence, the picture for us is huge now and it’s so bloody complicated it’s hard to know where to begin. We rightly distrust lobbies like the tobacco industry who have lied to us. Too much smoke and booze is demonstrably bad for you, as is too much religion.

Perhaps for all our cynicism the thought of monks and nuns making booze and hash is somehow more trustworthy than some big, impersonal corporation. Although God is kind of big and kind of impersonal – that being the point of belief.

Or perhaps it’s the idea of humility, of these people having the personal and moral courage to dedicate their lives to quiet worship and a higher calling. And us, in our busy, hectic and mad lives thinking, ‘I’ll have a pint of that’.

It’s a different perspective we seek. The whole purpose of religion as I understand it is to throw off the shackles of mortality, the limits of the flesh; to attempt as limited and mortal creatures to comprehend the infinite.

For example, I had a special cigarette the other day and got very worried about how far away the stars are. Too far, actually. Something should be done!

Whether you get there by prayer or by the bottle, perhaps we seek a new state of mind. Many intoxicants from tobacco to mescaline started life as portals to another, higher reality and were the preserve of seers, shamen and visionaries.

Often, the rites, from Dyonisis to the Bacchae were theatrical in origin as well, so maybe the Batman comparison isn’t quite as deeply stupid and offensive as I intended. A lot of this stuff was about a new vision, a connection to something greater. An empathy.

It’s a fine line, as you can tell from my examples, between liberation and destruction. We talk about being hung over. Hung over what, I’ve always wondered? It certainly feels like a void. Suspended over some great height, usually a toilet.

Finally, I don’t think it’s any coincidence that the blood of Christ is wine. Plus you get a snack, which is a bit like cannibalism, and a bit not. Because it’s in that moment of ultimate transformation and possibility that the essence of belief lies. It is, and yet it is not. The power is without, and within. And the wine is called ‘communion’ wine. A joining, like I hope we’ve done tonight.